Context & Research
For my first workshop of Year 2 with Sara our brief was to bring shapes, text, lines and colour to our workshop. I decided to bring in some abstract circles with bright colours and focus on a bright minimal theme. I was unsure on what I wanted to achieve but excited to learn some new techniques. 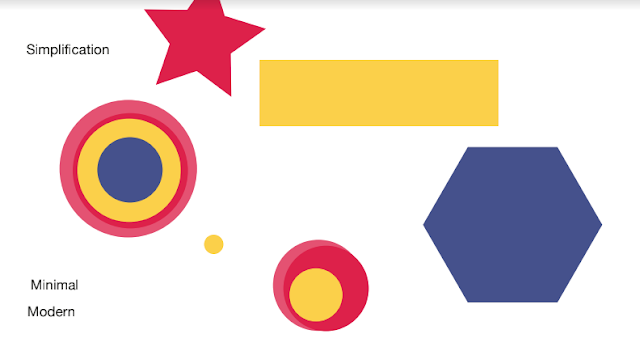 In the workshop we were set a brief we will follow to create a final piece:
Still unsure of what I would like to create, I decided I would learn the effects first and take everything with an open mind. Even if I learn the effects, I can then use the same techniques for a new narrative. My goal for Year 2 is pushing myself to try new things and not be afraid to make mistakes, I wanted to push myself out of my comfort zone.
New Effects:
I learnt some really cool effects today, my favourite is the Venetian blinds. This creates a transition from one scene to the other where the colour starts to close like a blind leading into a new colour. The wiggler was also a cool technique allowing the shape to wiggle and move around, this could also be adjusted to how much of a wiggle you wanted meaning you can have more wiggle or less.
Expressions:
Expressions were the next thing we were introduced too meaning coding in After Effects. At this point I became really nervous as I have done some coding in the past for some projects however it isn’t something I have enjoyed. I remembered to have an open mind and really try to get stuck in. We added a wiggle manually using Expressions and my fears wasn’t as bad as I thought, I actually quite liked this as I felt I had more control over the shape.
After learning all these techniques, I put all my one-second compositions together and created the following:

Process + Production (Workshop 1 with Sara) from Amy Winson on Vimeo.


I have really enjoyed this workshop as learning how to do some expressions and new techniques have given me some confidence to work with After Effects again. I did find the expressions the most challenging as I struggled how to properly move the shape at one point but this was due to a glitch on After Effects, after re-importing my shapes, the problem was solved. I enjoyed seeing my final piece come together at the end as I felt a sense of confidence that I actually managed to follow the steps and apply them myself.


I have decided to work on a new animation after the workshop to allow me to gain some confidence ready for the next workshop. My narrative for this is “Cells are cool!”, I have decided to work with abstract circles to create the illusion of a cell and use some techniques from this workshop to create this. I also will look into some new techniques to add to the animation which could potentially be used in the future. My sketches and notes for my independent animation are the following: 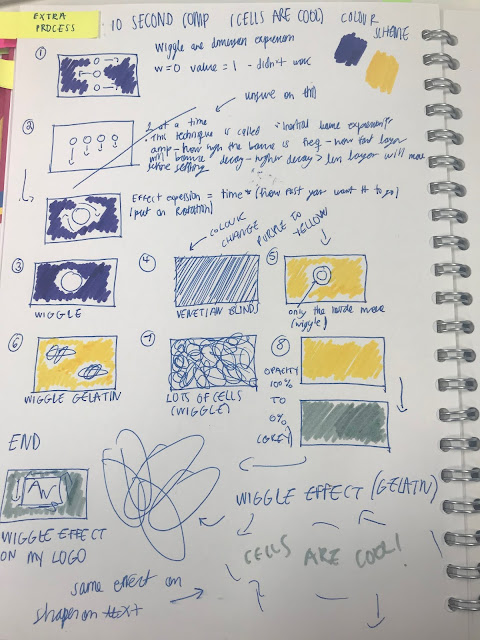 I decided to break this into stages. I am producing a 10-second composition and for 8 seconds will need graphics using shapes, colour and type. For my first second of the animation I decided to work with a new effect “Wiggle one dimension” – this is something I seen one someone else’s animation and really liked the idea of. I decided I would use three circles and alter them to be moving in different directions. I tried the first piece of code:

Code – this worked fine straight away and I played around with changing the numbers to achieve the wiggle I wanted.

Scene 2 I found the most confusing. This was to have the circles moving down. This was called “Inertial Bounce”. I tried multiple different codes and nothing was working. After spending some time I realised this was a similar glitch to the other day and I needed to create the shapes directly into After Effects. This is something I didn’t want to do as I layered my shapes in Illustrator and wanted them to look exactly the same. I made the decision that this expression wouldn’t be suitable for the animation and left this out. I replaced this effect with something different using just one circle, I wanted something very simple where the circle could rotate. I used a new effect which I pasted into the Rotation field “Time*10” however I adjusted this to 800 as the higher the number the faster the rotation. This effect is often used on clock handles, however, I decided to see what I could achieve using a circle. I really love this effect it adds a sense of abstract and minimalism.

In Scene 3, I wanted something very minimal to allow the design to speak for itself. I used the “Wiggle” expression that I learnt in the workshop. I then went on to working with the “Venetian Blinds” and went from Purple to Yellow (the same shade as one of the circles).

For Scene 5 I wanted to try and create a slight illusion. The circle which now sits on a yellow background is in the centre alone. I wanted to try and create a wiggle however only on the smaller circles inside the big circle. I was unsure how this would work but I decided to give this a go. Surprisingly this worked really well and I actually really love how simplistic yet effective this looks.

I wanted to finish on making the circles look more cell-like. I thought of the idea how when certain chemicals are added to liquid they can move and expand. This is the effect I was aiming for. I decided to now investigate into the animation presets and found the effect “Wiggle Gelatin”, I worked with only a few circles and distorted them to move out really weird and expand at a quick pace as if this was a video time lapse. For the final scene, I multiplied this and had a screen full of circles using this same effect which made it look quite creepy and odd. I really liked these two end scenes they are my favourite due to how abstract and fun they are. A lot is going on in these scenes and I think it is interesting that every time you play it back you see something new.

All of the effects I used I wanted to create the illusion of when cells and chemicals interact how they can expand, move and so on. I feel that I achieved this. For my closing scene, I ended on the last scene of the cells wiggling fading out on to a grey background and my logo appears using the same wiggling effect to keep everything consistent. I am really impressed with myself for this final animation as in the workshop I was slightly worried as it seemed a lot harder than techniques we have learnt last year. However, I am very happy that I got myself to do this and even try new techniques out as throughout my new workshops this might be something I want to add. I am happy I developed and explored the animation presets and new code/expressions. If I was to do this again I would work on the “Inertial Bounce” I think it would be interesting to see what this looks like on a singular shape.

Cells are Cool! from Amy Winson on Vimeo.


I also decided to come back to this blog a few weeks later to try and create more detailed illustrations and combining expressions within After Effects. I created a piece of freelance work using what I learn in Sara’s workshop to be used as a Christmas animation. I am really happy with the outcome of this as it was really difficult sometimes to make sure every asset is in the right place and doing what it is intened to do. Overall I am really happy and feel more confident using the software and combining more techniques from previous workshops.

Merry Christmas from APC Pure! from Amy Winson on Vimeo.